I rode the Belltown Park solo under the lights for almost an hour last night, I couldn't believe the place was empty! I got a few texts from people saying they might come through and sure enough a few heads showed up. Justin and Reed came down from the Manchester area and Jake came across from Newington, both pretty long drives to ride the little Belltown park. It was cool to see out of towners who haven't seen the park before into the set-up. Justin was psyched on the spine and emptying his bad of trick on/over it. Reed has never ridden a legit street spine and was a bit hesitant at first, but was boosting it in no time. Jake tried an abubaca on the new wallride/sub late in the night about a dozen times losing it on the last 5 feet of the rollback numerous times. He may not of pulled it clean, but it was burly!...and knowing him that will be the first thing he lands the next time he shows up. We ended up riding till the lights went off at 10 and it was a fun, low key session. Thanks for coming out guys. 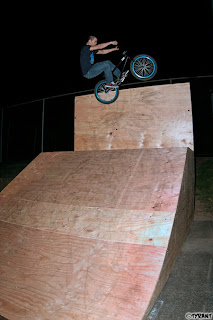