Yesterday's visit to The Lot was so strange! The first incident of the day was some random old guy who lives in the neighborhood just driving down to The Lot on his full size tractor and dumping the bucket that was full of grass clippings and dirt. After confronting him and asking what the hell he was doing it appears he thought some guy he knew owns the property, which we all thought was BS. He claimed he could dump there and take top soil whenever he wanted. So, that's where the soil has been going! I think he got the message that he wasn't welcomed and I doubt he'll be back. The 2nd incident of the day was when we discovered that somebody is living in the woods beside The Lot. Who ever the person(s) are they are not roughing it! Full on tents, folding table and chairs, grill, etc. Well after much discussion we decided to call the cops because the camp site was on the private lot property and there was some questionable stuff in the squatters stuff. Long story short, the cops came and were pretty shocked, but really couldn't do anything cause the person(s) were not there. Notes were left saying that the area needed to be vacated in the next 5 days...cause it'd take at least that long to walk all that sh1t out of there!!! We'll see what happens Friday the 14th when the area is supposed to be cleared out.

Besides that BS it was a fun day of building and riding. Blachura was running the backhoe working on the mini 20 pack super rhythm section. We did some riding of the mini set and the big line and then the pit bike crew started getting rad on their mini motor bikes. T took a nice digger and did a number on her knee! Despite that injury it was definitely a fun day! 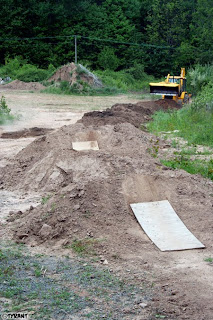 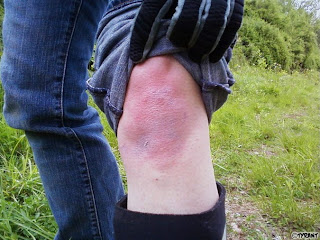