Grab your bike and get down to New Haven Saturday night for the most kick a$$ race of the year! TYRANT is one of the race sponsors as well as Death to Dopers, one of our other ventures. I'll be up in Boston this weekend for the Local Exposure Tour and some Red Sox games, so I need somebody to head down and rep TYRANT at the race. Word is that one of the prizes is a FREE knuckle tattoo from Eric Merrill, of of the nastiest tattoo artists in the country...and a fierce road cyclist! I dare somebody to win that prize and get "TYR" and "ANT" tattooed on their knucles! TYRANT!

Props to Drew for getting this whole thing organized and giving me the opportunity to be a race sponsor. 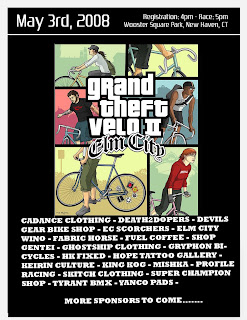 So Arnwine, Schmidt, Lolli, and I met up at Haven tonight to ride and the session basically turned into a curved wallride extravaganza. Half of the riders at the park were lined up to take runs at the new 180 degree curved wallride. I took a bunch of photos which can be viewed by clicking here.

Schmidt taking a ride on the 180 wall 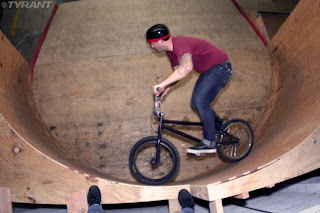 Posted by rideTYRANT.com at Wednesday, April 30, 2008 No comments:

I'd like to send a sincere get well out to Peter Krol who is laid up in a New York City Hospital with a serious head injury. Pete was warming up for the Hustle & Flow contest Saturday with Team Ghostship at the High Bridge Trails in Manhatten when he went head first into the lander of a dirt jump knocking himself out cold. From what I was told Pete's helmet was cracked in 2 spots, his glasses were broken into 3 pieces, he is covered in road rash style scrapes, and suffered a serious concussion. EMT's took Pete by ambulance to the hospital where he underwent a CAT scan and MRI which revealed his brain was bleeding and swollen. This is a no joke matter and I totally feel for Pete cause my crash back in 2005 was just about identical...except Pete's lucky to have his teeth! It's always tough to hear about another rider getting severely hurt and even tougher in this case cause Pete is the funniest, nicest kid around. Get well P. Krol!

Pete getting rad at M-Town banks back in '06 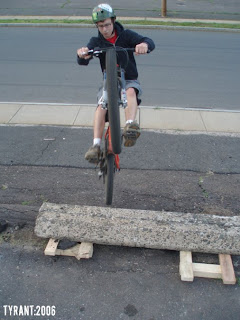 WOW! Today was of f the hook! The Local Exposure Tour stopped at Haven Skatepark and people were going off! There were riders from all over the East Coast in town for the event and everybody brought a huge bag of tricks with them.Check out the photos by CLICKING HERE. 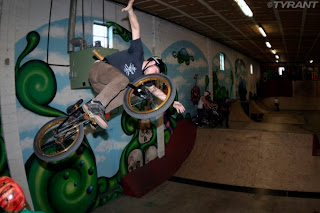 Sorry all, the 2nd Annual "Oh Damn" Jam WILL NOT be going on May 11th. Stay tuned for the the reschedule date. Don't worry, it will be worth the wait...I promise!
Posted by rideTYRANT.com at Wednesday, April 23, 2008 No comments:

T and I headed over to "Tiny TYRANT's" to ride his backyard ramp today. Rumor had it Brandon and his dad made some progress on the ramp last weekend so I wanted to go check it out. Sure enough, the ramp is coming along nice...now all we need is warm weather and sun! As always it was a fun time over the Begin's. Thanks for having us...and thanks for the post-riding munchies! Brandon was killing the ramp, check out the photos: Click Here!

"Tiny TYRANT" with a not so tiny air! 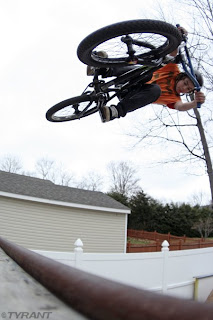