Thanks to everyone that showed up to the first Pedal Power Haven Skatepark rental of 2009 last night....good times for sure! It was rad to see some old friends come out and some new faces as well. Some of the Scorchers on fixed gears, mountain bikers, a rollerblader, a flatlander, and a ton of BMX shredders all going off. The highlights of the night were the fixed gears guys jumping the pyramid and Todd and CT Drew having a freestyle walk-off. Bonkers! I shot tons of photos, CLICK HERE to check 'em out!

Bryan Arnwine throwing down the tailwhip over the pyramid 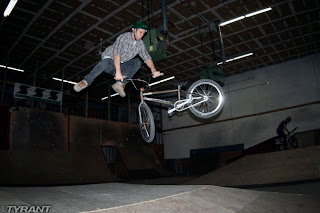 Back on the BMX

Tomorrow is the big day. I'm heading to Haven to ride BMX for the first time in 6 months!!! I've been scared since my August crash and now that I got my mouth guard its time to get back on the steed. Woo hoo!
Posted by rideTYRANT.com at Saturday, January 24, 2009 No comments:

So my best friend and his wife are the proud parents of a 8 lb 8 oz baby girl...who was a week overdue. That officially makes Spencer at Pedal Power a grandpa. Congrats everyone! This little lady will be rocking TYRANT real soon! 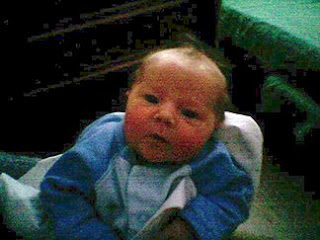 Posted by rideTYRANT.com at Monday, January 19, 2009 No comments:

WOW, scooters are pretty lame, but this is mind blowing! This kid is bonkers!
I'm going to see if he wants to rep TYRANT :)

Coming from the Westside...

So Craig Samuels hit me up via e-mail to let me know that this full length fixed gear flick is going to be coming out this year. Craig has been putting in some heavy time behind the camera and on the bike to make this project a reality! Rumor has it the premiere is going to be off the charts!...and TYRANT might be making a guest appearance on the West Coast for it! Check out this trailer for a taste of the hotness to come!


MIXTAPE VOL. 1 NO CASSETTES from FonsecaFilms on Vimeo.
Posted by rideTYRANT.com at Friday, January 16, 2009 No comments:

Check out all this stuff for sale!
Clothing, shoes, parts, road bike, etc.

CLICK HERE!
Posted by rideTYRANT.com at Thursday, January 15, 2009 No comments:

So the New Year is here and it doesn't feel any different than last year. My New Year's resolution is to get back on my BMX bike sometime in the near future. It's officially been 5 months since I've ridden. Still shaking out the cobwebs from my Summer '08 crash and trying to muster up the balls to hop back on the bike. I got my mouth guard last week to protect my already busted grill, now I just need a new helmet. I'll be down at Haven riding sometime this month...

Tiny TYRANT has been shredding, the Winter cold and snow aren't holding him back. Brandon has been shoveling off his backyard ramp in between snow storms and when he's not riding that he's at Haven or the Bristol Park. I see he's been messing with some footplant trickery...nice! 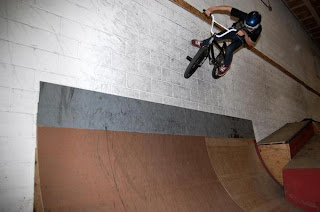 Schmidt has been doing all kinds of stuff in the past few months, but he's been dedicating the majority of his time to beard growing. When not trying to impersonate Grizzly Adams, Schmidt has been terrorizing West Hartford/Hartford on his fixed gear and hitting the ramps down at Haven. 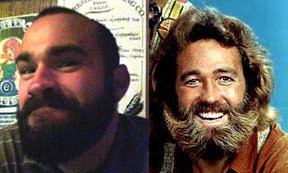 The TYRANT Store is doing well. I had a number of orders for the holidays and I'm currently in the process of finishing a few new designs. T's shirt design should be up sometime this month and I've been in touch with Shawn Hebrank about a design. 2009 looks to be a good year!

Ride bikes, have fun!
Posted by rideTYRANT.com at Friday, January 09, 2009 No comments: