Back to back t-shirt sessions, dare I say Spring is finally here! Merrit Mike was in town for the Holiday weekend so I scooped him and Steve up and we headed out to Willi to get a morning session in. Good call on our part, it ended up being a kick a$$ session. Some of the T&F guys were down from Mass. and some of the RI crew came across and dudes were getting rad. Def a good time! 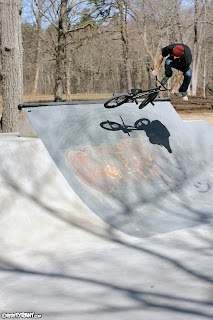 The skate vs. bike drama at East Haddam has been at an all time high the past week. People are fuming that the ledges are all busted up and apparently they feel sh1t talking and ghost riding their boards is going to resolve the issue?!?

Everyone out there knows damn well I was being a peg Nazi when the park first opened. As the rules stated "no pegs", but we were fortunate to get the town to allow plastic pegs/sleeves as an exception. We're quickly approaching the 1 year anniversary of the park and the snake ledge and sub box look like someone took a sledgehammer to them. Sucks! I'd be lying if I said I'm surprised! We all knew this was going to happen and we all questioned the no coping decision from the start. At this point, the ledges aren't magically going to fix themselves so I think griping about pegs on them is a moot point. I haven't seen much BMX action on the granite coping in the pool and do agree metal pegs need to stay off it! What pisses me off is the kids mouthing off that "It's a skatepark, not a bike park". Last time I checked, the skatepark committee that raised the funds to have the park built was made up of 80% BMX riders...most of who are still local and riding the park.

If the town is willing, I'm all for raising some cash to get some metal slapped on those ledges, even if it's just some angle iron. If not, on well. Shut your mouth and enjoy the park. Anything is better than nothing!
Posted by rideTYRANT.com at Saturday, March 30, 2013 No comments:

Could it be Spring?

Sunny, blue skies, 58°...is Spring finally here?!? A bunch of people met up at East Haddam around 5 yesterday evening and sessioned the park well into the darkness. Good times! 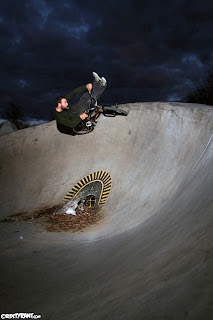 We had plans for the T&F crew to come into town last weekend, but ringleader TL had to take care of some business at home. We postponed the get together to the 24th...and it worked out perfectly! The sun was out and the temps finally made their way toward 50°. At one point we had 26 riders at the East Haddam Park, running it! It's always good when the T&F dudes come to town. Looking forward to making our way up to their turf soon! 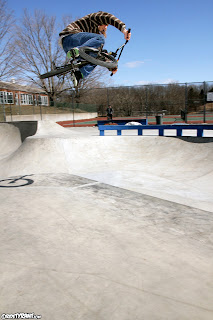 Steve and I shoveled East Haddam with 2 skaters for 4 hours yesterday in hopes of being able to ride the park today. We couldn't get the whole snake run clear, but it was clear enough for a fun session today. Sunshine, 50°, t-shirt, and sun burn to show for it. Awesome day! 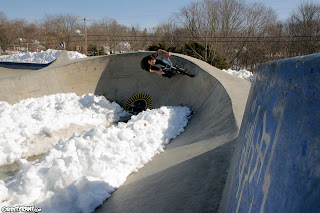