The title says it all guys! By far the quote of the week at Pedal Power. I tell you, its great working on Main Street...24/7 entertainment. The "street urchins" just crack me up!
Posted by rideTYRANT.com at Thursday, July 28, 2005 No comments:

Black Plague on the hot asphalt

Matt Lolli as been pushing me to name my latest build (an all black steel Trek road bike) something dark and evil. Last night I thought about it for a bit and came up with the "black plague". The hardcore thing about this bike is its only 4 lbs lighter than my BMX bike. Soon enough I'll have custom decals to tag her up with.....they're rad! I took the plague out on the hot asphalt for a 20 mile rip this morning before temps. became too hot to handle. I love pushing the big ring around the lake in East Hampton just taking in the sights and tacking on the miles. Until next time..........
Posted by rideTYRANT.com at Wednesday, July 27, 2005 No comments:

You ain't no Lance Armstrong!

Well the Tour de France is over and Lance Armstrong once again stands atop the podium wearing the yellow jersey with his seventh Tour victory under his belt. This man truly amazes me, I often think he is super human. How can a guy get cancer in the lungs, brain, and testes....take on advanced Chemo.....lose a nut and some brain matter in surgery.....and almost 10 years later stand atop the podium in Paris with 7 tour wins. "Vive le Lance" as the Nike shirt says, but don't forget no matter how hard you train and how hard you ride....you ain't no Lance Armstrong!
Posted by rideTYRANT.com at Sunday, July 24, 2005 No comments:

Gotta love a park all to yourself! 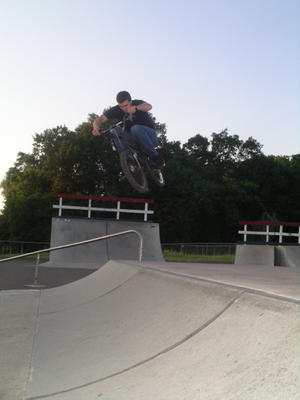 So I went over to the Newington Skatepark and had the place all to myself. Typically this place is infested with "skate rats" and clueless pre-teens scrammbling to not get hit by the bmxers. I'm all about supporting the youth and the future rippers of the core sports realm, but once and while its nice to ride without having to watch everyone's every move. Gotta love a park all to yourself!
Posted by rideTYRANT.com at Sunday, July 24, 2005 No comments:

So I took it upon myself to sit down and get this blogspot thing going today. Enjoy!
Posted by rideTYRANT.com at Sunday, July 24, 2005 No comments: