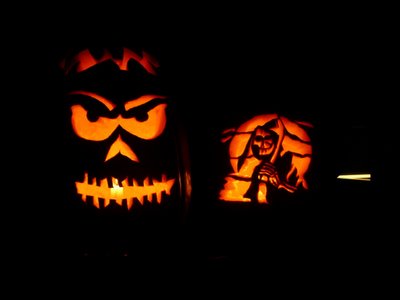 Posted by rideTYRANT.com at Monday, October 31, 2005 No comments:

Today there was a jam at the Newington Skatepark for Sly fox Jeff Sylvester's 21st Birthday. I am on the injured listed still and heavily medicated so my girlfriend was nice enough to take me to the jam for a 1/2 hour to shoot a little film and get out of the house. In that short while a lot went down, take a look on Tyrant photos published on Flickr.

Don Pavelka making a mockery of the spine 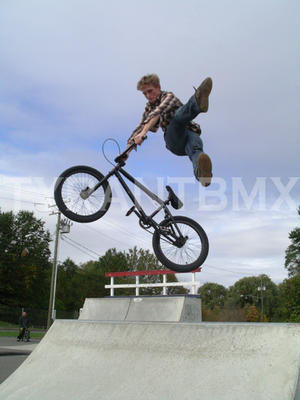 Posted by rideTYRANT.com at Sunday, October 23, 2005 No comments:

So the morning of my accident I was up at my girls house in the Boston suburbs and I rode Hyde Park. I never should have come back to Connecticut that afternoon!!! Since I've been bed ridden and all doped up I totally forgot I took Jess took some photos at the park that morning. Check it out, the place is really fun. Take a look at the rest of the pics at Tyrant photos published on Flickr. 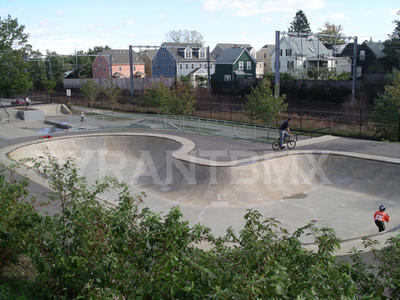 Posted by rideTYRANT.com at Friday, October 21, 2005 No comments:

So the whole process of rebuilding my mouth starts tommorow at 12:30, I have my first oral surgery appointment. I'm told this is going to be the first of 3-5 appointments depending on how things go. Take a look at the photos, I'm a little crusty! Anyway, I'm finally returning home this weekend so give me a ring, Jess is down taking care of me. 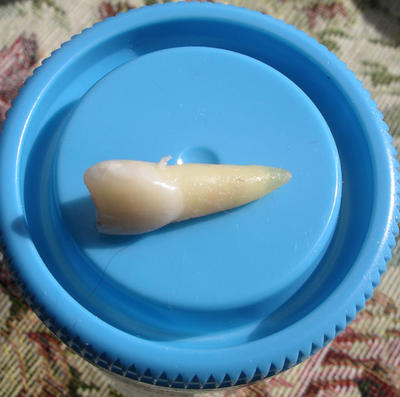 Just a heads up to all my friends and Tyrant supporters. I won't be posting any blogs this week, I'll be staying at my parents place for most of the week. I ate it really bad at Newington Skatepark today and am in rough shape. I was knocked unconscious and taken to Hartford Hosptial by ambulance. I chipped one front big tooth tooth and totally lost the other one. Two of my bottom teeth got pushed in, but the doctors were able to fix those. I have 10 stitches in my lower lip and I fractured my face just above my top set of teeth. On top off all that I suffered a concusion and my chin, upper lip, and nose have road rash bad. I look like I'm straight out of a horror movie and feel like a freight train hit me. I wanted to post a picture that I had my mom take of me, but it is way too graphic! See you back at the park soon...I'll be riding in no time!!!

I have to have oral surgery done at the end of the week. I got my hands on my cat scan photos...pretty scary! 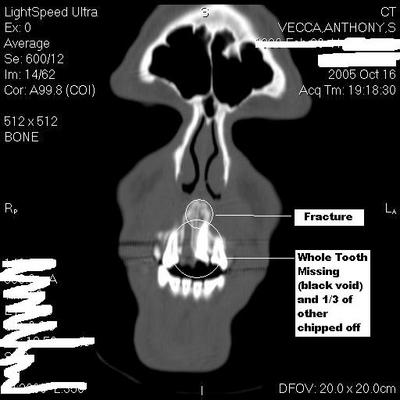 So its been raining like hell for a week now and we can't ride outside. We're all fed up with Mother Nature so we decided to prep Whip's Basement for the 2005-06 Winter season. Steve A., Whip, and myself moved all the ramps around creating a fresh new set up and some rad new lines for this year. Take a look at the pics at Tyrant photos published on Flickr.
Posted by rideTYRANT.com at Friday, October 14, 2005 1 comment:

Seeking refuge from the rain!

So the Pedal Power Crew met up in the parking garage in Middletown last night (it's 1 AM now so technically its a new day!) to ride some "street", if you could call it that. Basically, we have all had enough of the rain and we wanted to get outside and ride and there is no better place that the good old P.G. Steve A. was doing some high speed carves up the jersey barriers, Mike Stock was trying all sorts of trickey on his 26" bike, Matt Lolli was throwing down the flatland moves, and I crashed a lot trying to icepick a 3.5 foot wall...and I have a bloody left "swellbow" to show for it. We had a good old time and the whole crew came back to my place to chill and watch Road Fools 14 afterwards.

Steve A. carves fast and hard up the barrier 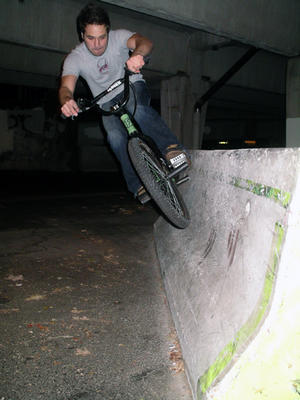 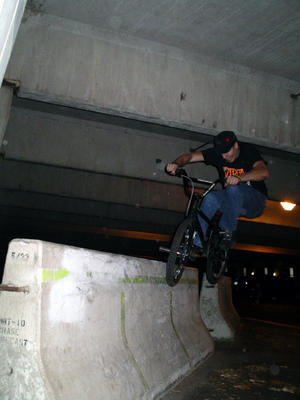 Posted by rideTYRANT.com at Friday, October 14, 2005 No comments:

The first official fundraiser for the Middletown Skatepark is this coming Sunday, October 16th, next to the Police Station in Middletown. Main Street is going to be closed for a classic car show and Court Street is going to be closed and full of inflatable rides and food, with all proceeds going to the skatepark fund. Stop by at 1 and grab some food and tool around on the rides. Rumor has it that there may be a few ramps set up too, but you didn't hear that from me. DON'T EVEN THINK ABOUT RIDING OR SKATING ON MAIN STREET THAT DAY!!! THE COPS ARE ENFORCING THE LAW BECAUSE ALL THE CLASSIC CAR WEENIES ARE AFRAID OF THEIR RIDES GETTING SCRATCHED!!!
Posted by rideTYRANT.com at Tuesday, October 11, 2005 No comments:

So the "old crew" rode at Jay's ramp tonight, and we were actually able to hold a conversation with one another....it was nice for a change! Anyway, we had a good old time at Jay's, despite the fact that he got rid of the vert wall and a quarter. On the upside Jay added 2 wacky quarters on the deck of the mini ramp which made for some insane trickery. Schmidt was doing some nice downside pedal chinks, Jay was doing his crazy brakeless nosewheelies to manuals, I did a pretty rad transfer to smith wall stall, and Ashley pulled out a rad brakeless nosepick on the wall. Tonight begun the fall/winter sessions at Jay's and I'm sure dozens more are to follow. There are a few photos below and the rest are on Tyrant photos published on Flickr 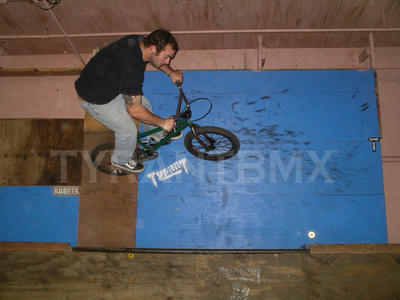 Ashley with a wallslap in the rafters 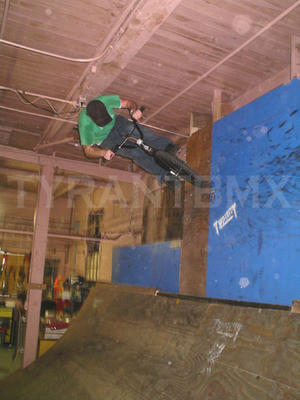 Me transfering out of the mini into a smith wall stall
Photo: Ryan Schmidt 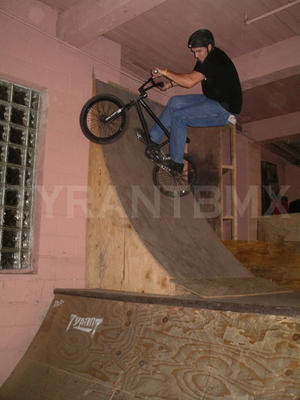 Jay boosting his ramp into the rafters 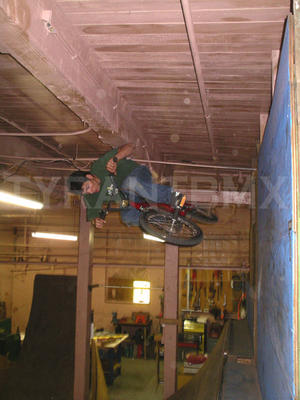 Posted by rideTYRANT.com at Sunday, October 09, 2005 No comments:

So I stopped by the Wethersfield Skatepark today because the rumor was that is was to open tomorrow, October 8th. There is no way the park is opening tomorrow, the weather has been too rainy for them to complete the place. The flatbottom of the street section still hasn't been poured, the top and sides are all dirt still, and there is still machinery all around. I'd say at least another week or two depending on the weather. Check out the pics. 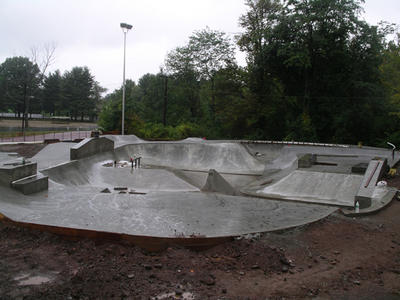 So much for a Columbus Day Weekend grand opening! 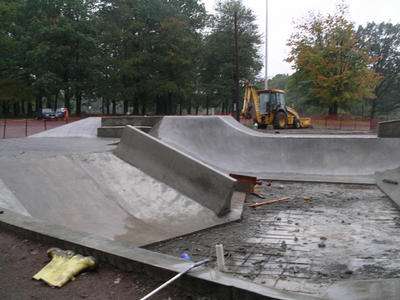 Posted by rideTYRANT.com at Friday, October 07, 2005 No comments:

That's what friends are for

So a crew got together to go out for an early evening street session. What was suppost to be a 3 man crew quickly turned into 7, with Matt Lolli and his camera gear being one of the add ons. Sessions are always a goodtime when Matt is shooting, it kinda pushes people to step up or at least try things out of the ordinary. We started at the North End Banks tooling around on the mini-sub box and hip. We then discovered a wicked slant wall made out of various bricks and stones in front of a brick & tile store. This wall is actually an advertisement with the companies name and product samples on it, but it made one hell of a wall ride. After a short session a local resident decided he had enough and informed us from his porch that he was calling the cops....you know what happened next...we split! The session then headed across town to the Baptist Church (as seen on Matt Lolli's Blog). That ended up being a bust because the church lot was full. Steve A. decided to bump jump the curb and wall ride a chainlink fence topped with barbed wire. He went super high on it, but the spring action of the fence ended up launching him off his bike and into a crash. After that the crew split; the youngin's went home to do homework and the rest of us sessioned the M.P.G Wallride. Once again, Steve A., who rides once every 2 weeks, was throwing down some serious wallrides with a couple over head height. If you know this spot the kicker is grass and dirt and like a foot tall so over head height is pretty burly. Anyway, after a few days of being a bit out of it and kinda bumming I really needed a fun session with friends. Thanks for calling me guys!
Posted by rideTYRANT.com at Thursday, October 06, 2005 1 comment:

So a lot of people have been e-mailing me looking for updates on Interbike and the Vegas trip. I've been a little under the weather so I apologize for not posting anything new. Anway, the trip started off with a bang when a totally drunk guy on our flight started crap with Digger Davis and Steve A. from Pedal Power. The guy was so out of it, he was spitting racial slurs at an oriental man, and yelling "Land this Pig" to the pilot. I thought for sure he was going to get arrested when we landed. Anyway, I decided we needed to mess with him when we got off the plane so as he staggered around the airport I stickered him up with a Tyrant sticker as a dozen other passangers watched and laughed. The Interbike show itself was really fun. Eastern has a sub 4 pound frame coming out, their Ti cranks are sick, we hung out at the Coalition and FBM booths every day for a while talking it up with Greg Walsh and Crandall, and saw the sights at the show. FBM has an insane new flatland frame coming out, Road Fools 14 and Red Bull Mean Streets are 2 great DVD's we saw, and the NORA Cup party was bonkers.....except for the $10 drinks. Next year we are bringing our bikes for sure, every night we saw Leif Valin, Seth Kimborough and a bunch of other riders out and about sessioning spots. Vegas was super fun, but I was exhausted when I got home and I am happy to be back. 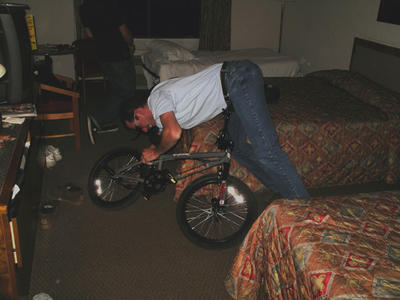 Jay Miele backflip off the wall onto the bed 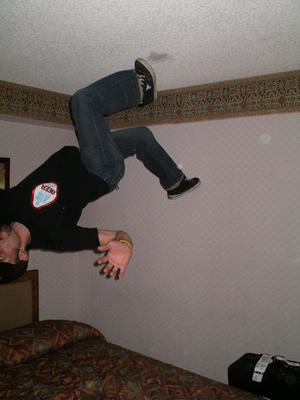 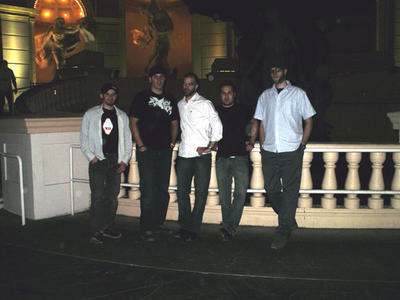 Posted by rideTYRANT.com at Wednesday, October 05, 2005 No comments:

So we returned from Interbike this morning at 1:00 am. The show was insane, some of the products coming out this year are pushing the envelope so much! Everyone had a hell of a time and nobody got too out of hand. Now comes the toughest part of the trip, recouping from the 4 days of rowdiness. Over the last 4 days I slept a total of 15 hours so don't call me to ride or do anything until at least Wednesday.
Posted by rideTYRANT.com at Sunday, October 02, 2005 No comments: