So last time Lolli and I went on this in state street riding trip his camera was a little screwy and he basically lost all 3 rolls of film he shot. Tonight/this morning we decided to go re-shoot all the stuff and session all the spots again...hitting a few new ones up too. Peter F. hitched a ride and came along for the fun as we made our way to Wallingford, Meriden, Berlin, Cromwell and Middletown. Thanks to Matt for shooting a ton of film again and taking the time to take a few shots and video with my camera as well. Check out the photos at Tyrant's Flickr. Quick clip of me pedaling across a Rt. 5 in Wallingford and manualing down a pretty long median super late night.

Me icepicking a guardrail atop a 5 foot bank 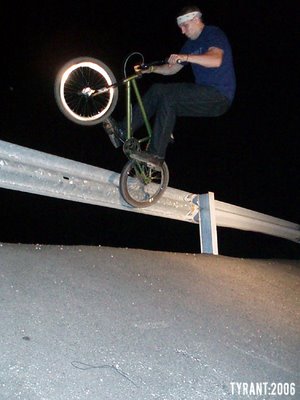