I was feeling a bit tired today so I decided to not ride and shoot film instead. I met up with P.Krol, Blachura, and John Salafia at the North End Bank to shoot a little film of yet another session on the ghetto parking curb sub box. I'll tell you, those urban MTB's are no joke! It took me like 10 trys to fuf the little sub on John's MTB. Its a whole new world with big wheels and a suspension fork!!! Check out the photos at Tyrant's Flickr.

Peter Krol going for an abubaca 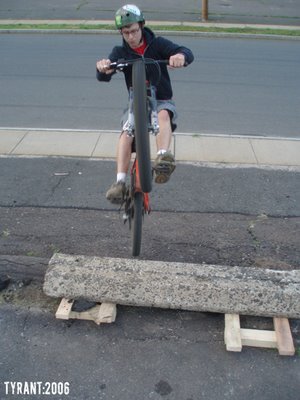