After a nice breakfast with my parents for Father's Day I headed out to the Begin's place to a picnic. As usual, right when I arrived tricks were getting thrown down except this time it was Brandon's twin 6 year old brothers stepping it up. I witnessed a one hander, some tweak airs, and even a quick no hander within the first 10 minutes. Brandon was boosting up and out of the 3 foot vert extension on the 6 foot quarter, has fuf's dialed on the 4 footer, and was pedal stalling the shadiest 4 foot "Derek Quarter" I have ever seen.....Derek would be proud!!! All in all it was a great day expect for the fact that it was 95 degrees out and I was basically melting all day! For the second time this year I broke my 30/80 Rule riding Tiny Tyrant's ramp...that is, no riding under 30 degrees or over 80 degrees...cause its miserable! Back in February we rode the ramp when it was 22 out and that was brutal too!!! Thanks to the crew for having me over and compliments to the chefs for the awesome food!!! Check out the photos at Tyrant's Flickr. 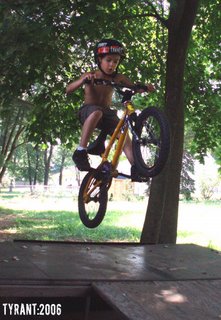 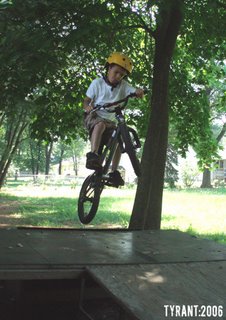