So Matt and I rode a little street tonight and I shot a good amount of artsy fartsy photos. There really wasn't any trickery going down tonight, we just rode to get out and get some air. Matt was pulling some rad mega spins and i was using my ghost powers again. It was nice to get out and pull some trickery with the camera instead of on the bike for once. I posted some pics on Tyrant's Flickr, but most of its artsy fartsy.

Matt in the midst of a late night harbor ledge session 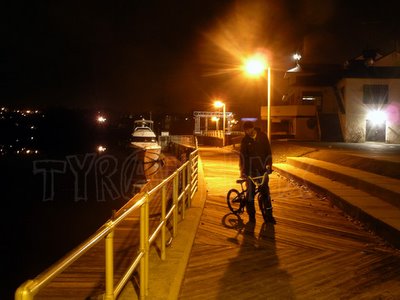