Saturday Steve and I headed up to Mass. to hit up Chris T's backyard 4 pack and rope swing into the river. The trails were dialed in and Chris was manning the hose keeping 'em moist and dust free all day long. Zack Holmes showed up, haven't ridden with him since the old MSC days, so it was great to see an old face....especially one still riding! We sessioned the jumps for a bit and then retreated to the river for some rope swing action. To our surprise...the rope swing was laying on the beach snapped...the handy work of a neighbor who wasn't supposed to be on the swing! We spent the afternoon hanging out and did some swimming using an 8 foots step ladder to jump off of...ghetto style! Good times for sure. Thanks for having us up Chris. See you after your 2 weeks at "Summer Camp". I hope you backed that fan.

We beat feet around 4:30 so Steve could get back to CT by 6, but mid-way home he got a call saying his plans were pushed to 9. Hell, more time=more riding. We hit up the Wayside Trails for a bit, but it was a short lived visit cause the place was bone dry and super pitted from the heavy rains last week. We packed up and made our way over to the Falcon BMX track and were blown away when we arrived. The track is in the process on being rebuilt and the 1st straight was done...with one hell of a pro double! Apparently we arrived about 2 hours after they had built the new jumps so we got some fresh, rut free runs on them...and they're smooth! We rode it out for about an hour and scooted home as darkness was falling. We capped off the night chilling at Steve's drinking some sodas around the fire. One hell of a Saturday BMX riding! 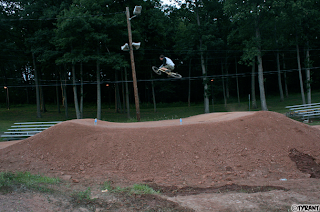