So it appears the Fairfield Skatepark is coming along nicely but I keep hearing mixed messages about bikes being permitted. A few riders and skaters at Haven I spoke to said they'll be permitting bikes, but the skHATERS over on Concrete Disciples are claiming it's no bike.

UPDATE: Thursday 2pm - Got a message that bikes, especially ones with pegs, are "discouraged" from using the park but not technically banned. Rock some PLEGs and hit the place up people! 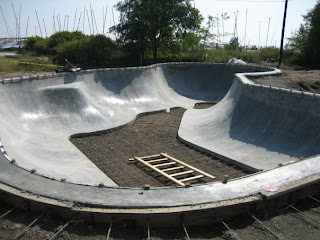 The photo is property of: SkatePerception.com
Posted by rideTYRANT.com at Thursday, December 03, 2009

I think you guys need to come together and protest these parks until bikes get allowed in too. Out here in CA with huge cities and towns you cant get your voice heard but in CT the city councils are so small and accessible you might actually have a chance.
If you keep letting parks open and now allow bikes then it will never stop.

I agree, but this park is so far from us that I couldn't get an army together to attend a meeting. You can be sure on the local front we'll stand strong. Lots of riders have been going to the Deep River Park despite the no bikes rule, but any bitching to the town is still being shouted at deaf ears! Oh well, if you can't beat 'em....ride anyway!