As mentioned in a previous post, our buddy Aaron Tauscher from Mass. got wrecked at the jam Sunday. Aaron was admitted to Middlesex on Sunday night with 2 breaks to his tibia and fibula which would require intensive surgery to stabilize his leg. I stopped in to see him at lunchtime yesterday and he was in good spirits with his folks by his side. At 8pm last night Aaron went under the knife for a surgical procedure that took several hours but ultimately was successful in repairing his lower leg with plates and screws. I spoke with him this morning and despite being hopped up on morphine, and not eating solid foods in almost 2 days, he sounds pretty with it. I'm going to try to get in to see him again at some point today because it doesn't sound like he'll be discharged until late in the day or tomorrow. It's always a drag to see a fellow rider get hurt, especially when hospitalization are surgery are required!

Heal up buddy, we're thinking of you! 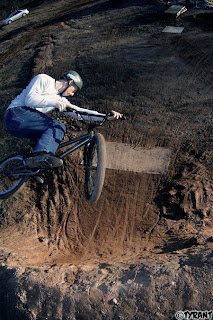 Posted by rideTYRANT.com at Tuesday, December 01, 2009