Yesterday was Bry Arnwine's birthday, the whopping 27! Wow does time fly! I remember Bry's 21st party in his basement like it was yesterday. 99¢ decorations, flaming grind boxes, Jello treats, and more Miller High Life than a NASCAR event! We headed over to the Cromwell Skatepark around dinner time yesterday to met up with a bunch of people for a late afternoon session. It was a scorching day and with the sun heading down we here hoping for some cooler temps. Bry is rocking some new blinging gold Eclat pedals and he's been going wild ever since he got them. I don't know if he has better traction now or what, but he's been pulling out new tricks left and right. Bry was corking some nice 360 to fakies on the quarters last night and pulled out a dialed hop whip! What do the scenesters call that nowadays, a whopper? Blachura cracked his Sinister DNA frame he just got last month and they had him a new one in a day or so. Dave was rocking the new frame and no-footed canning over and off everything at the park. Both Garrett's made an appearance, Garrett P. landed a hang 5 to whiplast and Garrett S. was throwing down some funky grinds. We had a super fun session that lasted well after dark. Gotta' love Summer sessions! 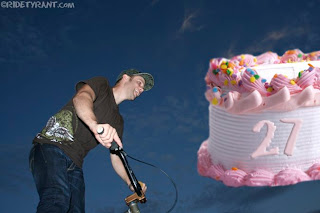