WOW! Sunday was off the hook! I was at Haven for 13 hours and some serious riding went down! Tons of photos are up!

To start the day the Amateur's competed in a park competition. Damn! These kids are gooood, and most of them are 14,15,16, etc. Brandon Begin took 3rd throwing down a tire grab, toboggan, and some rad pedal grinds all while rocking out in the new TYRANT t-shirt ;)

In the Expert competition people were going off and Don Pavelka and Jake Lineberry were rocking out the TYRANT T's. Jake threw down a crazy 720 over the box, a backflip turndown over the hip, and some flairs. Don took home 3rd throwing down some gross inverts, tailwhips, bar spins, and what not.

The "Best Trick on the Sub-Box" contest was by far the highlight of the day! Everyone who entered was going big, but it really came down to Gary Russell, Don Pavelka, Tom Burke, and Jake Linberry in the end. Bryan Arnwine was giving it hell trying to land a handplant over the sub, but came up a bit short. Gary was throwing down some rad pedal stalls to 270, icepick to fakie's, and his banger was a dialed downside icepick. Tom was going off on the sub box with ice picks, icepick to no-footed can-can, bar-spin to ice pick, etc. Jake Lineberry was landing abuabacas, ice picks, downside foot plants, and a 270 smith stall to fakie. Don footjammed the sub, but his focus was manualing the top of the sub-box to tailwhip off...which he eventually landed. It was super close between Don and Gary, the judges couldn't really decide but in the end Don won the Ghetto Trophy. All in all it was SICK!!!

After the comps I had the park rented from 9-11 and for the 2nd month in a row I GOT SCREWED! When 16 people claim they're coming and only 6 show up that leaves me $120 in the hole...which sucks! No more rentals on my dime unless people pay ahead!!! Kat at Haven was nice enough to stick around and let us ride a little longer which I greatly appreciated! THANKS!

I was super psyched that the new TYRANT shirts were well received! I SOLD OUT of shirts by the end of the day and took a bunch of orders as well. $10 bucks, get your hands on one!

A HUGE THANKS to everyone that made this contest a success...Haven Skatepark, DropOut BMX, Stampede BMX, us, etc.

A HUGE THANKS to Don Pavelka, Bryan Arnwine, Jake Lineberry, and "Tiny TYRANT" Brandon Begin for repping TYRANT all day everyday. You guys are kick a$$! 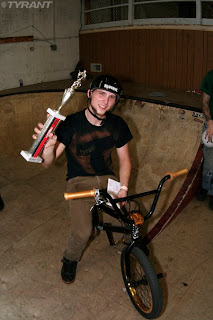