Lights on at Clinton

So tonight T, Arnwine, and I met up with a bunch of people at the Clinton Park for a night time session under the lights. Great times with great friends! Tons of amazing trickery caught on film over at TYRANT's Flickr.

2 stories from tonight worth reading...

First, the cops show up at the park looking for some girl. One cop is asking everyone around the skatepark if they know this girl, was she at the park, how long ago was she here, etc. Come to find out, this girls parents reported her missing earlier in the day. If I had know I would of grabbed the girl and turned her in...and demanded a reward of course. The girl was hanging out at the skatepark for like an hour and when the cops came she booked it into the woods with some boy. Apparently folks in Clinton found this to be such an ordeal that it made it on the 11 o'clock news. Read the story HERE. Typical middle school drama! Girl lies to mom and dad and says she is hanging out with friends and she runs off to be with her boyfriend.

Story 2 is brutal, no lie! Nolan Parent is one of the Haddam BMX shredders. I've ridden with Nolan a ton of times over the past 8 years I know the kid has balls of steel...but tonight I found out he is just plain invincible!!! Nolan was attempting to pedal stall the 5 foot sub rail, but he fell outward and over the rail. To save himself from falling 8 feet, Nolan reached out to grab the chain link fence and nabbed it with both hands. Nolan was hanging from the top of the fence...but have you ever seen the top of a chain link fence? It is basically spikes. Both of Nolans hands were stabbed with two 1/2" steel fence barbs and he was hanging like a human shishkabob!

Nolan had to pull himself up and literally rip his hands free. It was the grimiest thing I have ever seen and no lie, there were skin chunks stuck in the fence. What blew my mind was that despite 4 major puncture wounds and lots of blood, Nolan got back on his bike and landed the damn trick the next try. BURLY! Dedication at its finest! Props to Nolan for having a steel set!!! 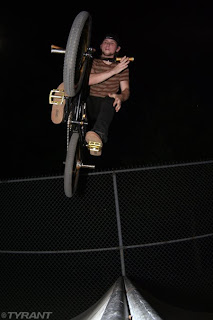