So the full pipe mission was a success........well we made it there. After leaving Connecticut at 4 AM we made it to the full pipe by sunrise with just enough light to tie the ropes and rappel in safely. After 20 minutes of labor to get myself, my girl, and my bike into the basin we were shocked to see tons of water in the pipe. I thought the pipe would be bone dry seeing it hasn't rained in over a week, but all the cracks in the basin walls are allowing water to flow in. There was a stream running through it about 4 inches deep and a foot and a half wide. The walls were also cracked in numerous spots inside the pipe itself and water was seeping in like crazy. Even with the 20 pounds of cat liter and shop broom we brought we had no chance against the water. I made several attempts to ride the pipe, but kept slipping and falling. There was also very limited light, the pictures look like its the middle of the day, but its really 6:30 AM with a flash. The trip to the pipe was a success but no riding really went down.....although my girl and I slipped and went down at least a half dozen times each. All in all it was a great adventure, to bad we didn't get the sick riding photos we were looking to get.

We've made it to the basin just after 6:00 AM.
Time to monkey around the fence and lower ourselves in
(Just for the record, its a 3 story drop!) 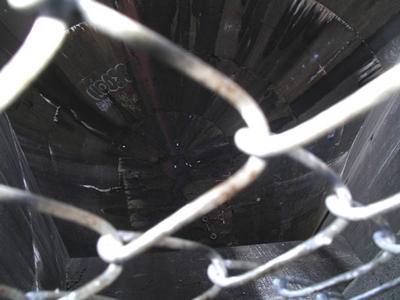 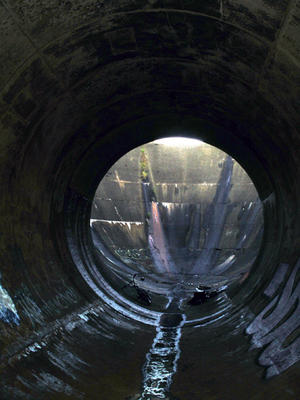 Inside the belly of the beast. According to the maps I
obtained this pipe runs miles underground. 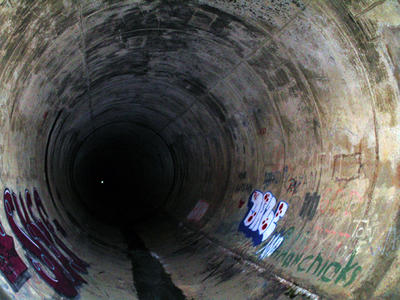 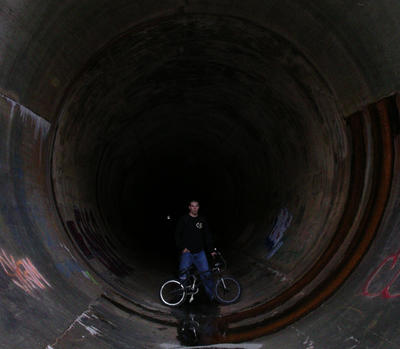 Posted by rideTYRANT.com at Sunday, September 11, 2005