Out for A While

Sorry for the lack of updates, it's been a rough few weeks to say the least!

I haven't been feeling well since early June and it all came to a head last weekend when I spiked a 102 fever and was doubled over with severe stomach pains Sunday night. Being the hard head that I am, I fought the pain and sickness for 3 days till Wednseday before T encoraged me to seek medical attention. The initial thought by the doc was Lyme Disease until an abdominal CAT Scan was ordered. After the scan I got hit with the news that my appendix was possibly perforated and about to rupture and I needed surgery ASAP. I left the clinic I was at and reported to Middlesex Hospital where I went under the knife Wednseday afternoon to remove the appendix and some toxic fluid around the area. Come to find out I also had a small tear in my intestines that they found while they were Roto Rootering my insides! Damn, my gut was all messed up. Word is if I hadn't caught it when I did I would of been in serious trouble....like dead!!!

I spent a few days in the hospital so they could monitor me and be sure the antibiotics were kicking in to prevent internal infection. I'm basically on house arrest till my follow up on July 11th. I'm on 2 heavy meds and can't drive my car or do anything active...besides short walks. I've already been told I'm officially off the bike for the better part of July. I'll be looking forward to shooting lots of photos and video in the coming weeks to prevent me from going insane!!! 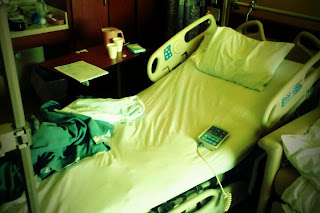