So Lolli decided to plan out a Best Trick Jam for last night. Basically it was a huge street session that moved from spot to spot every half hour or so. We met at the New Haven green around 9 and had a dozen riders, but by spot #2 there had to be at least 25-30. That's rolling deep! Some of those fixed gear dudes are mind blowing! Bunnyhop barspins, 180 to revert barspin out, 3 stair gaps, 3 stair 180's, and all kinds of flat ground trickery. I didn't get to shoot as much film as I wanted...T, Bry, and I split to Mamoun's for some dinner treats and when we returned to spot #2 there were 4 cops there. Apparently the cops were on the hunt for a BMX crew that smashed up a car Thursday night and they got word of our large group or riders thinking we were the BMX crew. Basically that shut down the session and everybody went to Rudy's. T, Bry, and I headed back North to Middletown and called it a night. 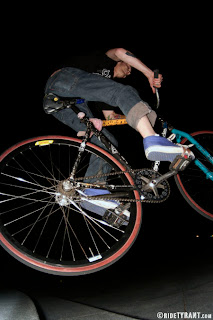