Wow, T and I had a great time at Falcon BMX this morning watching the Stampede Team rip it up. Props to Ben and his squad of 20" shredders and props to the Falcon BMX crew for keeping that track alive. I remember racing there 20 years ago!!! 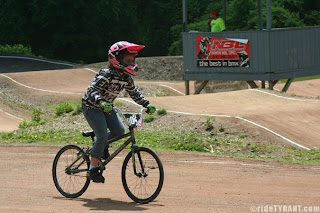 Props to the folks at Haven for putting on another super fun event! The Death Rail Jam drew a good crowd, about 12-15 riders competing and a good 50 spectators. People were going off and the winner, some cat named Louie, pulled a smith to hop over...on a 2" round rail! A huge congrats to Jake Lineberry for taking 2nd repping TYRANT with a burly hangover toothpick. Jake also had one of the burliest crashed when he attempted a 180 onto the rail and ended up hitting his bicep, chest, and face on the rail. That dude ain't right, I swear he feels no pain! Tiny TYRANT gave the rail a few rips but decided blasting over the stair set gap was more his style. Brandon hucked a nice turndown over gap which shocked a lot of us and was thinking about a 180...but his wrists and ankles were saying no. That little ripper has his hucking dialed! Thanks to everyone who showed up, good times! The photos will be up in the morning. 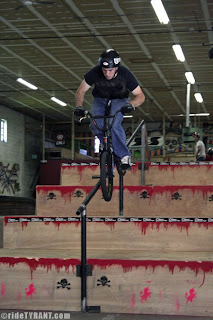 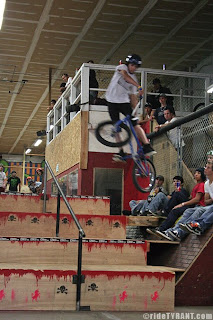