Despite a smaller turnout than usual, the Haven rental last night was a great time! It was like a homecoming for Don Pavelka...we haven't seen him since the Summer. Don was going off like he does any time he gets on his bike and it was fun to watch. The Scorchers crew came out rocking their fixies...and clown bikes...and Sean Milnes was gapping the 4 stair set which blew me away. I don't know how the hell those Velocity Deep V's held up to that drop and impact! Jamison Bazinet, photojournalist extordanaire, was helpful and let me borrow his slave set-up to get some different lighting effects. Jamison was my lighting assistant as we hustled around the park and took a few co-op shots. A huge thanks goes out to everyone for coming, and for kicking in extra cash to cover the rental fee. 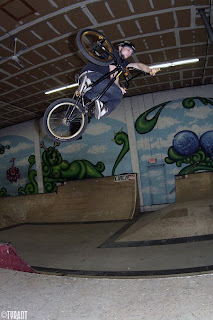