So I only rode the MSX Trails once this year, pretty pathetic, but nobody was up-keeping them so I don't feel guilty. T and I stopped by the trails yesterday to see how things were looking. We had hopes of raking out the place and tidying up the jumps enough to make the place ridable till the 1st snow fall. To my surprise there is a new medical building being built less than 100 yards from the trails right through the woods. Based on the property markers that were staked out the small set and berm are on the land of the medical building. With that said, I think MSX is truly going to see its death this year. I'm going to stay optimistic, but I wouldn't doubt the trails are leveled before 2008. Lots of good memories at those trails, especially from 2001-2003 in the Haggerd Trails days when I was living in Middletown. 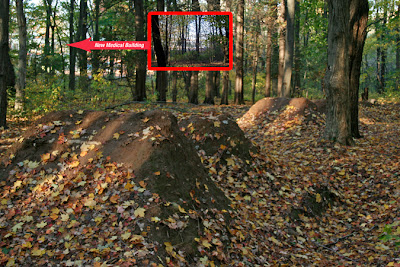