Yeah, that basically sums up the session we had at the Clinton Park tonight under the lights. It was fun for about an hour until dense fog and spotty showers rolled in. A militia of guys came out to ride including Don Pavelka and Garrett Pyskaty coming down from Warwick, Rhode Island. As usual people were going off...too bad I left my slave flash at home and was stuck using the cheesy pop-up flash on my camera. Not to mention, I can't shoot film under those stadium likes worth shiat! Anyway, check out the photos at TYRANT's Flickr, there are a few hot shots. Until next time....

Don thought this table sucked. I thinks its dialed! 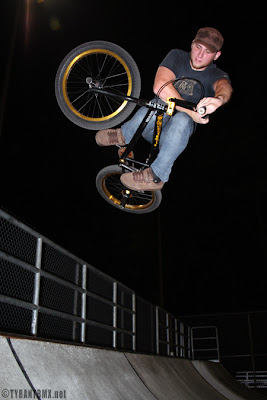 Posted by rideTYRANT.com at Wednesday, October 03, 2007