So we started off the new year with a bang! 15 riders showed up in Middletown to head out and ride some street, including Garrett P. and Don driving all the way up from Warwick, Rhode Island. In typical "Dondor" fashion, Don was pulling out the stops and landing tricks off and on everything. Schmidty came out to shred which was nice, haven't seen him in months. The Pedal Power Crew was in full effect with half the staff out on their bikes. REPRESENT! Team USA Trials Rider Bryan Yezierski graced us with his presense and was going big like usual! All in all it was a good night and a great way to start off 2007! Riding bikes and having fun with friends! Check out the photos at TYRANT'S Flickr as usual. Also check out the little video I threw together below.

Don with a 16 stair rail slide 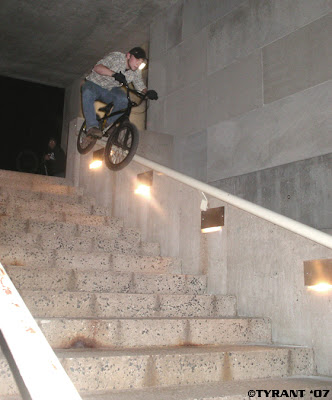 Bryan Y. with some "hairy" trickery 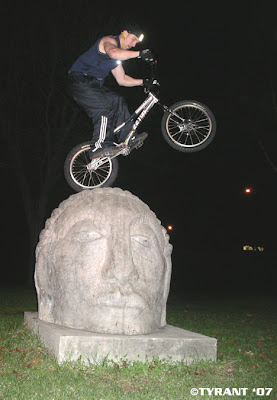 Thanks to Matt Lolli for shooting a ton of this video while I shot the still photos!
Posted by rideTYRANT.com at Friday, January 05, 2007