The main purpose of the roadtrip to the mid-west was the Race 2 Replace, but Matt and I did bring our BMX bikes so we could shred all the local parks. The first park we hit was the Kokomo, Indiana Park which was outright scary!!! The whole park is over-vert and its big! I was so initimidated! Luckily Lolli was able to get a shot of me in the fullpipe before I decided I was too much of a wuss to ride there anymore. Next on the list was the Major Taylor Skatepark in Indianapolis which was really fun and had a great layout. The local riders were friendly and the session was fun. So after a few days in Indy we packed up and headed due south to Louisville, Kentucky home of the sickest skatepark in the US! I must say I was really impressed with Matt. For someone who has just gotten into ramp riding over the last year he was carving the fullpipe well and looked super comfortable on his MacNeil Deuce Deuce. The last park we hit up was Jeffersonville, Indiana and it too was very fun with a cool layout. The only bummer of the BMX part of the trip was me falling 2 days in a row on my right hip. By Saturday night I was just about limping and felt like I got hit by a truck. All in all the sessions were rad as hell! Tyrant's Photos on Flickr 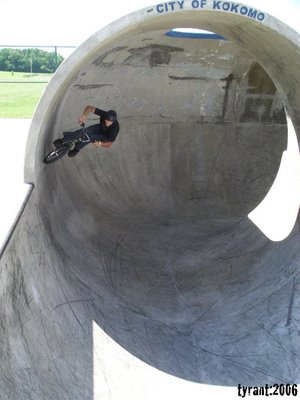 Matt in the Louisville fullpipe 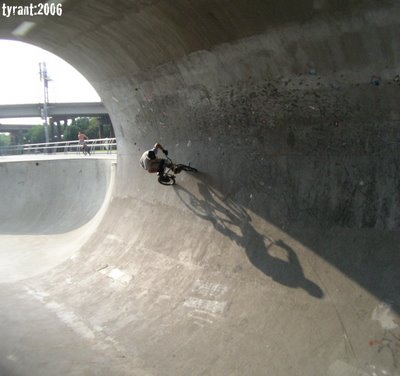