So Vic Bettencourt was nice enough to call today and give me a heads up that a crazy session was going down at the Mass. Warehouse. Apparently Walter Pieringer was in town filming for Props Visuals upcoming "New England Scene Report". Don Pavelka and I headed up to ride and it was one hell of a good time. I hadn't been to the warehouse in months before tonight and it was nice to see all the old faces. Riders came out of the wood work to represent New England and insane shiat was going down!!! Don was going off as usual 360 tailwhipping the spine within the first few minutes we were there. Other shredders like Andre Postel and Eric Hennessey from Mass. and Hector "Terremotto" Restrepo and Justin Spear for CT were killing the place as well. Its nice to see so many rad riders in the northeast, the west coast gets too much exposure. They can keep their warm weather, palm trees, and plastic women...East Coast for life!!! Check out the pics at Tyrant's Flickr. They're nothing special...shooting indoor sucks with a point-and-shoot digital camera!!!

Don Pavelka with a clicked fakie turndown on the quarter 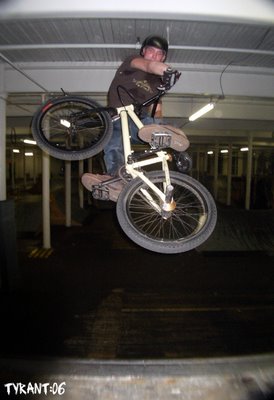