So a new park opened on the Connecticut shoreline and a bunch of us headed there in the morning after we got booted from Groton. The park is pre-fab, but its a great layout with lot of big ramps. Finally something solid for a bike to ride! As usual people were killing it! We rode for a few hours and everyone went home...but we had to go back for more. So a crew of us returned from 8-10 for a night session under the stadium lights. Yes! That park is fully lit! The only downfall is its a brand new park so its infested with kids. There were at least 50 people there last night...good thing none of us care...we just bomb through the crowd! Check out the pics at Tyrant's Photos on Flickr 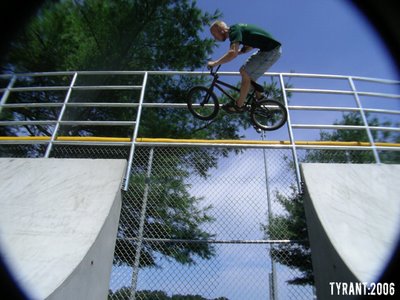