Just wanted to send a get well out to "Digger Davis" and remind all you kids to wear your helmets!!! Digger is one of Pedal Power's finest and late Tuesday night while throwing some trickery down off a loading dock he almost did himself in. I thought my crash back in October was harsh, but Davis topped me for sure! Concussion, 7 stitches in the forehead, 3 under his seriously blackened and swollen shut left eye and major road rash all over his face, head, and neck! BMX is fun as hell, but you never know when you're going to take it hard! No worries though, Digger is hardcore and he was back at the shop today....just sporting the mummy look (I was lucky enough to catch him between bandage changes). He'll be back on his bike in no time, Digger Davis never rests! SOOT!

Still in one piece, but barely!!! 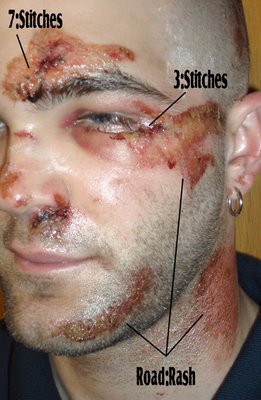