So the weather man didn't lie to us, it was actually 60 degrees yesterday and sunny all day! Bry. A, Blachura, and myself headed over to the Wethersfiled Skatepark to ride all day. Aaron Tauscher and Kris Houle from Mass. came down to ride the park, which was rad...they both kill it! It ended up being a fun session and a lot of great riding went down. Aaron and Kris both took nasty spills a few minutes into riding, which really spooked me, but they both bounced back and were dialed the rest of the day. Mercenary Steve showed up and was going big like usual and Craig Samuels showed up brakeless and rode well. I was psyched to here Craig earned his degree and is done with school in Rhode Island and is moving back to CT...one more local ripper at the parks! Wethersfield got way too crowded so we headed to Newington, which turned out to be even more crowded....with all little kids none the less! I'm all for young kids learning to ride and skate, but its out of hand when parents just drop their mini-van full of kids off at the park, leave them for the day unsupervised, and the kids have no clue what they are doing. Its a recipe for disaster and I almost witnessed a few deaths yesterday. When a biker is coming down from 6 feet in the air and Little Jonny Clueless is standing at the bottom of the quarterpipe...he's getting plowed at full speed! OK, I'm rambling now. The short of it is it was an awesome day of riding with great riders/friends, Spring is coming, the days are getting longer, and I'm psyched to be riding a ton more!!! I took some photos like ususal, check them out at Tyrant's Flickr

Aaron Tauscher was flowing Wethersfield like he'd ridden it a million times, but I'm pretty sure it was only his second! 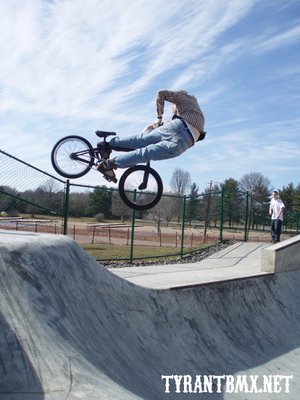