So the usual crew, minus D. Whip, decided to go out street riding tonight. The weather was amazing, a total sign that Spring is on its way! We had a really good session and it was nice to ride on a Friday night instead of blowing tons of money bar hopping in Middletown like usual. Steve A. did a pretty rad fence ride, Matt was pulling some sweet footjam to fakies on a funky pitched bank, Arnwine attempted a bunny hop 360 going full speed down the street...and he made it about 345 degrees around...he's nutty!!! and I finally got my manual dialed back in. All in all it was good to be with friends, chilling out, and having fun on a Friday night! Steve A. contributed a few photos and I shot some photos as well, check them out at Tyrant's Flickr

The crew chilling at the Harbor 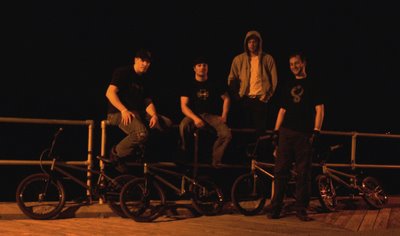