Yesterday was an all around kick a$$ day! The weather was spot on...sunny and in the low 70s, we rode all day, and nobody got hurt. Schmidt, T, and I headed up to the Southwick Trails around noon and to our surprise the place was empty. A few little kids on Walmart bikes bombing around for a bit, but then the place cleared out. It was pretty dusty, but all the lines were ridable and we were having fun jumping for a solid 3 hours. A few guys showed up late in the session and were getting rad on the 4th and 5th jumps in the 6 pack line. Looking forward to getting back up there a lot this Fall!

After Southwick Schmidt had to head home, but T and I were still down for some more riding. A crew was meeting up at Krol's backyard to ride the pump track and do some digging on the jump line. We rode the pump track for a bit and then moved the kickers in place on the jump line to get things going. The new set-up at Pete's is very similar to his old one, but it's going to be a good time when it's done. On top of that, Pete got a new Canon 5D Mark II so lots of high def. video is going to be shot at his place in the near future. He was shooting some test clips last night and they were epic! So nice...5D's a bit much for me...but a 7D would be nice. Santa, can you make that happen? 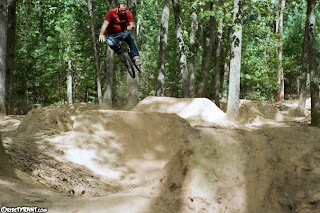 Posted by rideTYRANT.com at Monday, September 06, 2010

hey do you guys remember how to get up there? i ride for stampede and im taking a trip up to mass for the big and i thought i might be able to get some riding up there