Bryan and I braved the 90º temps yet again and headed over to The Lot yesterday afternoon to do a little riding. To my surprise I got a call from Hector letting me know that he, Cristian, and Matty Still were on there way over around 7 PM. The crew was on their way home from a stunt show in Long Island and wanted to ride a little dirt. It's always a good time hanging out with the EAST guys...guaranteed big air and lots of laughs. Cristian threw down some bar spins in the new line and Hector threw himself over each set pulling out some 3's, whips, and a back flip over the last set. It was the latest session of the season thus far, we rode well after dark. I left around 9:45 in the pitch black after tidying up the jumps a bit after the session was over. The new 8 pack is running pretty smooth and with a little rain and some TLC on the last jump and lander the line will be mint. Looks like good times this Summer at The Lot. 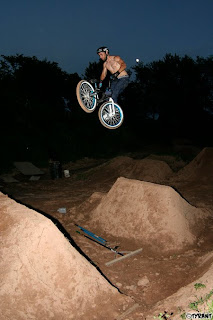