I met up with Macisco, Tom Burke, and their buddy Matt for a Labor Day park and trails session. We rode the Guilford Skatepark in the afternoon and the place was empty, except for swarms of bees. Trying not to get stung between each run wasn't my idea of fun. A huge thanks to the a$$holes that tipped over the port-o-let and trash cans and sprayed soda and juice all over the park...you're the rejects that are going to get the place shut down! On a positive note, we had a great time riding and the guys were going off. The DropOut guys hadn't ridden Guilford before and were having fun on the various ramps and obstacles. Late afternoon we headed up to Middletown to ride The Lot. The place was super dusty, but a ton of people ended up showing up to hang out and the session was really fun. Burke landed a dialed 360 whip off the first jump, something never done before at the The Lot. We had a brief scare at the end of the day when Macisco (riding the jumps brakeless) didn't get his hand back on after a 1 handed table and went over his bars head first into the lander. Mike bounced right up with a small scrape on his face, a nice shiner starting, a swollen forhead, and 1/2 the dirt from the lander on his clothes. Ouch! Yesterday was an ideal way to cap off the 3 day Holiday weekend and say goodbye to Summer. Lots of riding, lots of friends, lots of fun! 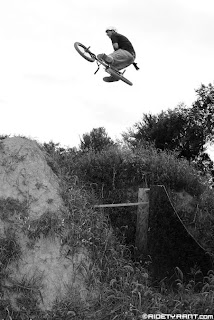 Posted by rideTYRANT.com at Tuesday, September 08, 2009