Yesterday was a super fun day, despite being a total rollercoaster of emotions. Dave Blachura rode in the Open Slopestyle Comp. at Highland Mountain Bike Park, missing his girlfriends High School graduation party to do so. The comp. was jam packed with talent and I was totally blow away by the bag of tricks some of those dudes had. Barspins, tailwhips, backflips, tuck no handers, 360's, nothings, cork flips, etc. all like 15 feet in the air! Dave rode really well in the qualifiers, which was a jam session, and surprised us all when it was announced he was the #1 qualifier going into the 5 man final. Of course, we were all giddy and cheering for Dave, its the first time the kids really done well in a larger event...and there were 3 invites to the Claymore Challenge up for grabs! The finals were a "Best 2 Runs" format and the heavy hitters threw down big! In Dave's 1st run he got tangled in his bike doing a backflip and ate sh!t on the lander sending him off course straight into a mud pit. When I saw Dave wasn't hurt I was screaming at him to keep going on to the next obstacle until I noticed his whole right arm and handlebars were solid mud. Run 1 was a bust and put pressure on Dave to throw down in his 2nd go at it. In run 2 Dave 270'd the big hip and landed squirrely resulting in his hand slipping off the bars and hitting himself in the face and double pinch flats. I'm going to be honest, in all my years of racing road and mountain, I've never seen an athlete end up with such sh!t luck in an event. Dave proved he has what it takes takes to get a Claymore invite, but it just wasn't in the cards yesterday. On a positive note, there is a LCQ on July 17th, the day before Claymore, and 2 more invites are up for grabs. You can be sure Dave will be training his a$$ off at The Lot over the next few weeks and be back on the 17th to throw down. I'm stoked for Dave, he rode well, looked comfy on his bike, and most importantly...had fun! At the end of the day he didn't take home a win, but Dave proved he has a ton of potential and is on the come up! Congrats dude! and as always, thanks for repping TYRANT. The new "Dirty Dave" shirts will be done before the 17th!

Props to everyone at Highland who helped out making this event a reality. The course was dialed and it appeared everyone had a good time. Thanks. 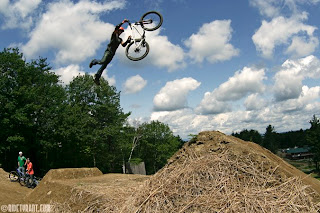