WOW, another year at Interbike and another 7 days of madness. D.Whip and Digger Davis are out of control...the definition of "loose cannons". Luckily, we haven't gotten the "1 call" yet from the drunk tank. Ghostship Matt and I raced CrossVegas last night and it was pure punishment. Lolli rode a great race and had about 200 yards on me with 3 or so miles to go. Sadly, Matt took a digger on a paved corner and crashed pretty. Matt is a little road rashed and his bike was pretty tweaked, but he finished strong. I ended up ahead of Matt as a result of his crash and to all of our surprise I was the "#1 bike shop employee finisher" in the race winning me the "Retailers" bracket. Man, what a crazy mess of feelings...I felt so bad that Matt took a digger, my whole body hurt from racing, but the fact that I won the bracket got the adrenaline pumping. I ended up getting called up to the podium, got a rad cow bell engraved with "CrossVegas Winner", and had tons of photos taken on me with the winners of the other brackets. Such a great experience on a gnarly grass course. After our race we hung out and watched the mens race which was insane. Lance Armstrong showed up to give cyclocross a go and got shelled...despite a solid effort. All in all Vegas is Vegas...CRAZY!

I have to give a shout out to the guys at Swiftwick Socks for flowing me those rad calf height socks for the race! A shout out to Lolli for hooking me up with the new Ghostship shirt to rock at the awards ceremony. Also, a shout out to Ashley at Outlaw Earth for all the shirt hookups!

Here is a taste of what Jason shot... 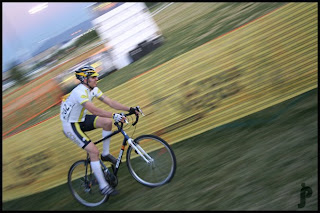 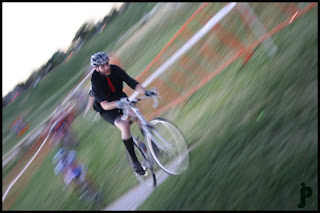 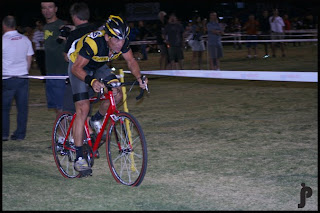 Tony at the podium 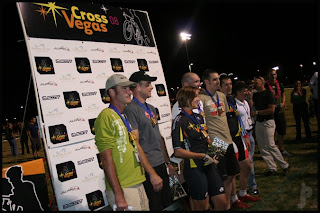 Posted by rideTYRANT.com at Thursday, September 25, 2008

I heard about Lolli's digger. That sucks.

Congrats on the finish.

Glad to see Swiftwick followed through. Now I gotta get my feet in a set of knee-highs for next season.