Starting November with a bang!

So I started the new month off by doing a ton of riding! I started the day at 4 am on the road bike in the rain with the lights running to guide my way. I put in 38 miles before I headed to the office for 8. It is so much fun getting out when nobody is on the roads. I was out for a few hours and I saw literally 6 cars....amazing! After putting in 9 hours at the office I headed out with a crew to do some night time street riding in Middletown. Arnwine, Lolli, Steve A., Pete F., The Todd, and I rode for a few hours hitting up several spots. It was like the old days as we sessioned Spear Park for an hour ripping grinds on the slick ledges. Steve A. rediscovered his feeble grind and looked like the Steve A. of old...like 1999-2000ish....when he was killing it on a regular basis on the BMX bike. It was sick to see him super comfortable on his bike again and eyeing up some burly stuff! Lolli traded the BMX bike in for his track bike mid-session and was pulling out some wacky stuff and trying to learn even crazier things. As usual Arnwine was going off manualing for miles at a time. The Todd and Pete F. brought out their STPs and were fine tuning their manual skills and trying Lenosky style trickery. It was super fun to get a crew out to enjoy the unusually warm weather and ride hard. Sadly I think this will be one of the last warmer nights of 2006. Check out a few photos I took at TYRANT's Photos

Steve A. ripping some huge feebles like the old days at Spear 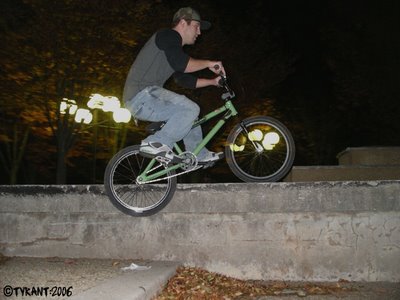 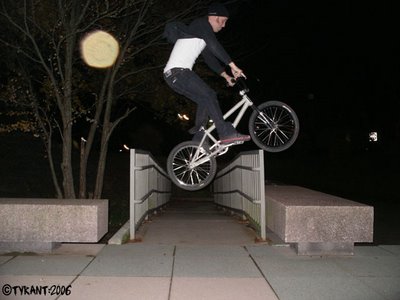 Posted by rideTYRANT.com at Wednesday, November 01, 2006