So Steve A., Whip, and I rode the basement tonight and Todd, P. Krol, and John came by to hang out. Peter shot a little video with his new $4,600 video camera...WOW! Thanks Santa! Steve A. almost hit his head like 20 times, was riding a million miles an hour, and at one point hit the light bulb coming out of a ceiling socket (see below photo) with his shoulder on the way in from a wallslap. Check out the photos at Tyrant's Flickr

Steve A. with a wallslap in tight quarters 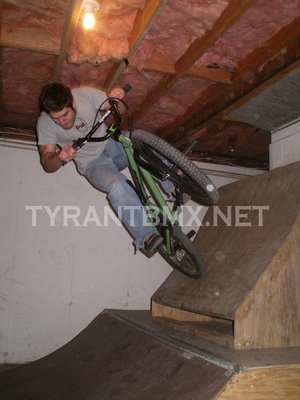