Yesterdays jam at Newington was off the hook. A ton of riders showed up, the most I've ever seen at the park! The start of the jam was a bit delayed thanks to some dumb broad rear ending Ryan Howard's truck full of Cutting Edge goodies, the grill, tent, etc. as he was on his way to the park. After a brief visit from the cops and the usual accident BS Ryan was on the road again. It was great to see Don Pavelka, haven't ridden with him in almost a year...and he was going off as usual! Tom Kalmanidis took home the bunnyhop win at 40" after a long battle with James Nelson and "California" Ethan Pawlak! Instead of a product toss Howard decided to hide all the merch around the baseball field about 1/4 mile from the park. We rounded up all the kids by announcing "Who wants free stuff?" and once we got their attention we told them to run like mad and go get it. Some kids were hustling for that free swag...too funny! Thanks to everyone that came out and thanks to Ryan and the guys at the Edge for making it happen!

I'll have a short video of the bunnyhop contest that T shot up later today! 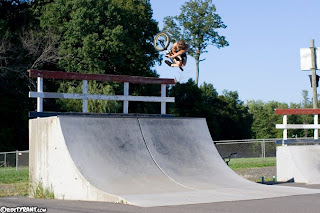