So the rumors are true, the City of Middletown is moving forward with tearing down Spear Park this Spring/Summer. Spear Park has become a legendary Central Connecticut riding/skating spot over the past 10 years having been sessioned by several pros and featured in a few videos. Sadly, the cities crack heads, drug dealers, drunks, and bums also like to call Spear Park home because its park benches and tables are hidden behind brick walls and trees out of sight from the law. I couldn't tell you the amount of times we've rolled up to ride Spear at night and found some wack job passed out in the bushes! I realize years of kids waxing and grinding the ledges has done damage to the park, but I assure you that is not the reason the park is being torn down! It's the shady shiat that goes on there in the wee hours of the morning! For the time being, the town has done some major pruning to make the park easier to see into from all sides when cop cruisers pass by. To our benefit, the removal of several low branches has opened up a few ledges that were overgrown. I'm making an effort to find out when "D-Day" is going to be, but you can be sure there are going to be a few heavy sessions at Spear before that place gets demolished. 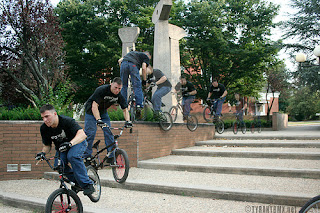