Today was a pretty odd day! I sat around the house for the better half of the day, took a brief walk, and then headed out to shoot some film of some friends riding street in M-Town. I realized a few things today...

2. The Middletown Police need to do their job and pursue criminals, not harass fisherman and bike riders at Harbor Park.

3. Jake Lineberry either has balls of steel or is out of his mind....or both! and I don't think he feels pain?

So with that said, the session was short and sweet. Jake Lineberry hucked himself around like usual pulling all kinds of crazy stuff. Like #3 above says, I really don't think Jake feels pain. I watched him double peg a huge stair set and totally wreck at the bottom, scorpion grinding and going head over heels entangled in this bike. After shaking off the crash, checking out his arm (which was bleeding in 3 spots and his elbow had swelled to the size of an apple) he walked back up the stairs and did the rail again! Arnwine was bombing at high speed like usual pulling out jibs here and there. Expect more pictures this week! For now check out what I shot at TYRANT's Flickr. 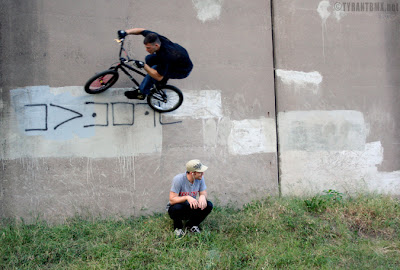 Posted by rideTYRANT.com at Sunday, September 09, 2007