For those of you that don't know, TYRANT is based out of Portland, Connecticut. For almost 8 years now the town has been without a skatepark, and the previous 2 parks they did have were epic failures. I'll give the town credit, they were one of the first to put in a pre-fab cement park back in the late 90's, but man was it horrible! Several years after that park was torn down due to construction at the school where it was located, a new wooden park was built on a local tennis court. This park had some potential, but the town felt the need to make it supervised, charge admission, and ban BMX...yet another epic fail! I'm not sure what resulted in the end of that park, but I'm sure their strict guidelines and the park attendant getting caught selling dope to kids didn't help.

So here we are, 2012, and the town just got a $230,000 grant which they intend to "satisfy the communities need for athletic fields". That's some BS if I ever heard it! This town has dozens of fields, some are even lit for night use! It's time to raise awareness that we don't need more tennis courts, more baseball fields, more soccer fields, and another playground in town! We're not asking for all the money, but put some toward a skatepark! 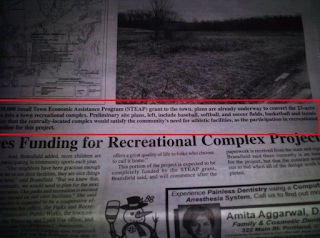