Wow, this weekend was so much fun! The weather was ideal, tons of riding went down, and nobody got hurt...you really couldn't ask for much more. We kicked off the weekend by meeting up with Hebrank and friends in NoHo for some veggie dinner and lots of story telling...always a good time. Saturday was an early one...Steve, Bryan, and I headed over to the Wayside Trails early and did a little clean-up before the jam at noon. Saturday's jam was kick a$$! Lots of riders showed up and everybody was having a good time flowing through the jumps. Props to Schmidt and his work crew for getting that place dialed and running smooth for the jam. We hung out at the trails almost into the darkness and then a few car loads headed down to Haven for the evening session. It was super fun riding with the Mass. crew all day. Matty Still, Aaron Tauscher, and Chris Traverse were riding great at the trails and the park. Thanks for coming down guys! Sunday I met up with Schmidt and we headed down to hang out, film/photograph with fix-style rider Sean Milnes. Sean hucked a huge gap which I filmed and the footage will likely be turning up in a new fixed video due out soon...which is rad for Sean! After some street jibs, we hit up Edgewood Skatepark for a while and ended the session at Rudy's for some tall boys and frites...yum! Such an epic weekend, can't wait for the next!

Schmidt getting gnarly at his trails, Wayside 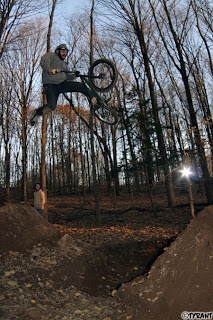 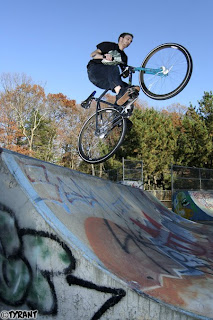